Forms of motion, balance and rhythm were expressed in totality last weekend at Index Art Center in Newark, New Jersey. December 12th, 2015 was the opening of their show, Separate Matter. The event showcased the work of Matthew Nicolosi, Seth Goodwin, Kevin Merkel, Jay Roth, Matthew Gosser and Diana Palermo’s independent exhibition of her work titled Documents of Control where she utilized patterns, repetition and energy to express the inner qualities of her identity.

Artists were synonymous in their interests with the artistic formalities of movement, harmony and control, yet each voice is uniquely present; offering a new insight into their materials and their exploration of themes.

The room is segregated into forms. Jay Roth’s constructions of metal, clung to the walls, rhythmically gesturing the public to migrate toward their presence. Upon investigation of their pieces, paper is seen to be infused into their making. Cuts and gaps in the metal were established to allow a synergy of elements to coalesce together and flow through their invented environments.

Roth’s most successful piece, is that of a metallic womb-like mass. Balanced on its apex, the work nearly hovers for the viewer, a large hole cut in its center, exposing the organically flowing insides, as if a manufactured robotic organ was being constructed. Roth’s pieces echo the voices from abstract gesture works or that of Stella, yet his ability to distribute energy and motion into metal is both innovative and invoking. Matthew Gosser’s wooden construction, sits in the corner of the room. Impressive in its mass and delicate in its form and balance, the piece seems to dance silently in its own reality. The force and strength of its frozen movement dissects the space and interjects its essence into nearly every vantage point.

Seth Goodwin’s pieces balance the room, existing on opposite sides: a functional chair design along with neo-dada inspired forms. Working with either found items or found processes, Goodwin utilizes materials in explorative ways.

Goodwin explains that he is focused on providing a new identify for found materials, yet the processes of their construction are as valid to the work as is the final product. Goodwin investigates the history of making objects, using boat bending techniques and hand tools to explore his ideas, for example. Seth’s concern with process are reflected in each of his pieces, regardless of the physicality of their construction.

The intricate metal sculptures of Kevin Merkel are woven through the room, offering curious movements of geometric forms. Operating somewhere between art and function, the near-alien-abacus-like machines indicate a higher purpose for their creation, yet we lack the understanding to accomplish the task. Each piece engages the audience through visual and tactual sensations. Merkel identifies his work as attempting to “liberate the material forms so it may realize its actualized vision.” 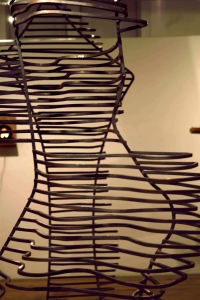 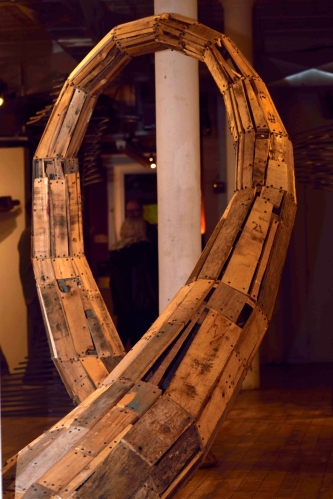 Finally, the show culminates in success through the work of Matthew Nicolosi. In the center of the room is a totem of strength and fragility. Through its orientation and placement in the room, the wooden mass connects the explorations of the other artists into a singular identity. The piece is a wave, a gesture, a motion. Created from found materials and crafted by the strength of will and hand, it establishes a mood and an energy for the room.

Its form is delicate and bold. Created from dismantled cargo crates and reassembled into a structure of tension. The wood scraps of its skin, twisted around its form as its body motioned up and down. A wave of wood, the piece intended to reflect the motion of energy via the systems of wind and water.

Nicolosi states, “the work renders a dynamic event in a static state. the viewer can admire, contemplate, enjoy, or just be present with an ostensibly transient force.”

The work in Separate Matter form a bond between one another. Entering into the space, no one sculpture seems disjointed from the reality created. Each form presents a private and individualistic vantage point for access into their world, yet the harmony amongst them unifies the space and transports the viewer into a reality of form, gesture and energy.

(all images courtesy of K.Anthony Lawler) 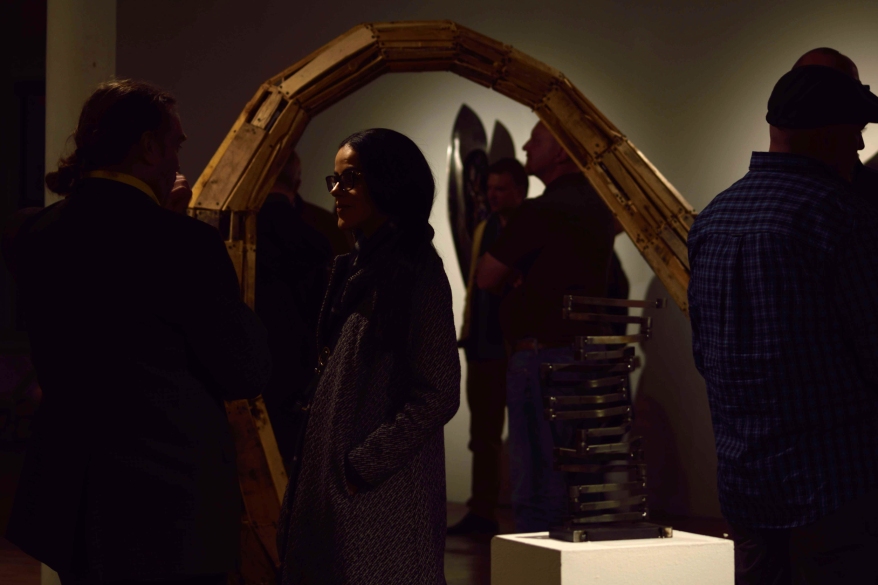 Artist, Educator, and Seeker of the Techno-Sublime View all posts by ericvalosin