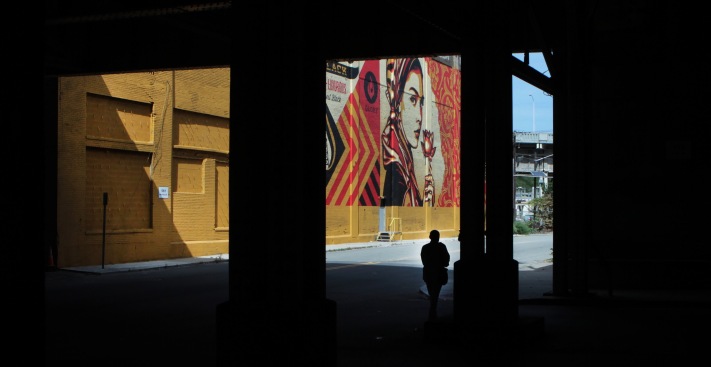 A large brick wall in Jersey City has become the canvas for a mural named ‘Natural Springs.’ Precisely why its artist, Shepard Fairey, decided on that title is a mystery. I prefer ‘581 Monmouth’, the number plate of the building which his wall art adorns. And adorn it does, a vivid splash of blacks, reds, cream and yellows – 200 aerosol cans-worth – enlivening a dour, rusting city landscape. This miserable spot is hemmed by the exit and entrance roads to the Holland Tunnel. And perhaps they are a clue to the message contained in the painting they unwittingly frame. The 147ft-long mural begins, from left to right, with a series of hard geometric shapes before morphing into a portrait of a beautiful woman. Next to her is a floral brocade design which in turn gives way to more hard lines. The effect is varied and lively on the eye. The message however is something else. Again from left to right, the first geometrical is headlined like an advertising billboard with the words:”Paint it black”. “Decadent-Luxurious.” “The Richest Black.” A teardrop,or maybe a rain-drop or just a droplet contains the silhouette of an oil-rig. There’s also a globe featuring the continent of America and the word ‘Power.’ Across from it is a flame engulfing another word ‘Glory.’ The beautiful girl is expressionless. She holds a flower whose petals drip oil. Beside her, the brocade swirls hide a gasoline pump. The heavy-lidded face of Andree the Giant, Fairey’s trademark image, is framed by a lone star. And finally there is a ‘$’ sign opposite a human skull which in turn surround another oil derrick. Beneath it is one word ‘Obey.’ The latter is apparently the artist’s chosen signature, though it could just as well fit with what I suppose is the general statement made here: that greedy corporations, particularly the gas and oil industries, have too much power. That they squeeze the life and spirit out of nature in their pursuit of profit. And that’s about it. Hardly a subtle message. Not a particularly profound one. But certainly an eye-catching one. You can, if you wish, drive towards the Pulaski Highway and catch a glimpse of the woman trapped below. But better, take the car along Monmouth, remember to switch off the gas and have a look for yourself. For my part, I left thinking that Fairey’s ‘subvertising’ wall art might next take a pop at Walmart. Now that would be fun. 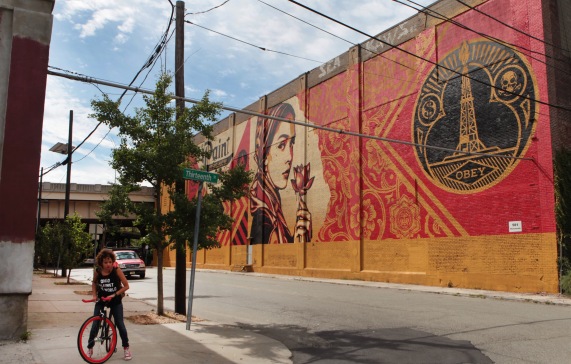 View all posts by nooneisanartist