The Sublime, the Ridiculous, the sick, the tired, and even the kitchen sink (somewhere I’m sure) all came together for the Jersey City Art ad Studio Tour. Although too vast to encounter all the arts culture in Jersey City, even a random smattering of gallery, studio and art-space became a litmus test, and answered two of my burning questions about Jersey City Art, What is happening, and Who is showing? My choice to start the day was at Curious Matter for their show “Sanctus;” a group-show reinterpreting the relic and reliquary as its place as an object of veneration, but within a contemporary art context. Owned and
run by Arthur Bruso and Raymond E. Mingst, the gallery space is located in the foyer of a beautiful brownstone apartment near the downtown Grove street area. The mood of the show, much like the theme, was sublime. Far from the white cube of most contemporary gallery spaces, Curious Matter retained the original molding and hardwood floors one would expect to see in a brownstone; the emphasis being on natural light, with the experience of the work changing throughout the day. Although all of the pieces were small, none of the choices were incidental, more products of a divine narrative. I immediately gravitated towards the ax hanging on the wall directly across from the door, “Two Hands of God” by Christian Brown. In Browns words, the revered objects save themselves the fate of becoming the garbage of the future, a contrary statement to the preciousness of the artmaking process. The axe with it’s exquisite carved handle, adorned by a copper blade, the utilitarian tool transformed into ritual weapon.; a symbol for the power of the quotidian object lifting itself into the realm of the divine.

Being the highest pieces in the show, literally above the rest of the work,
I couldn’t help ruminating on the contradiction it represented. The preciousness of creating an artwork that may end up as labored detritus. Even the other works in the show, fragments of body parts such as the hands in Christin Millet’s “Sever: Agatha’s Offering” and Tal Barel’s “Untitled” print, could have been severed by the same ax that hangs directly above. Sanctus is both the cathedral to these works that have pushed beyond the realm of the common, and a cautionary tale for the limits of canonization.(Sanctus catalogue images courtesy of Raymond E. Mingst)

From Your Move, a dance photography show

Following Sanctus was a long steep walk uphill to Art House Production Gallery for Your Move, a dance photography show; the stunningly shot work of dancers flexed and in motion, simultaneously reinforced the strain of the long walk to the exhibition, and gave a new appreciation to the tension of the bodies on display

The last pick of the day was an exhibition at Raven Gallery, “Freakshow,”  in contrast to the ethereality of Sanctus, a darker, more human side. Fortunately, travelling to the gallery, I got a little turned around and stumbled into 313 Gallery and Gaia Gallery. The former, 313 Gallery, is an affiliate of the Jersey City Art School, and features a frontal gallery space, with a back studio area. Highlighted up front for the walk, was artist Norm Kirby (instagram #NormKirby) displaying a series of photographs documenting drawings made with thick strings woven through chain-link fences. Included alongside the images was a section of fence woven with the image of a giraffe, stretching from floor to ceiling. My initial reaction was more an “a ha” moment, walking through Jersey City looking for art, I find art that is made in collaboration with Jersey City itself. The photographic documentation stand to only capture an experience of passing by the work, an interplay of detritus and drawing, where the vantage of a pedestrian may only see refuse, and a passing cars light may create shadow graffiti against a wall behind the drawing. 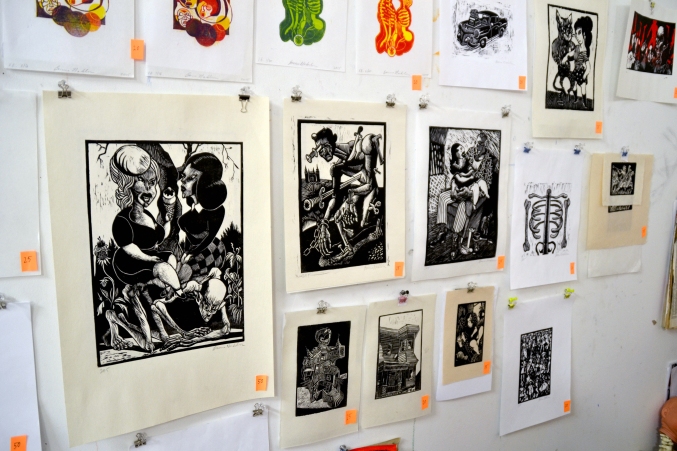 An invitation into the studios reveal a day to day artistic practice within the city, a mix of painters, sculptors, printers and designers, honing the craft and work for the next exhibition. Luckily one of the artists, Bruno Nadalin, a printmaker and drawer, had work in Raven Gallery’s “Freakshow” and was able to point my back in the direction of my target venue, but not before a wonderful introduction into his work and invitation inside his studio. 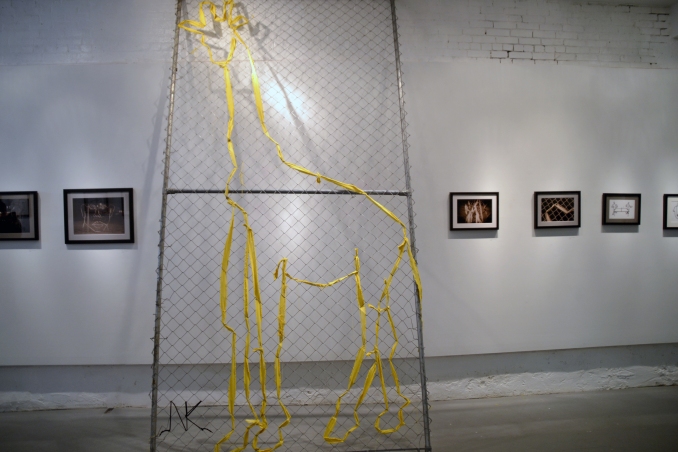 On the way out the next gratefully unplanned stop was Gaia (www.gaiastudio.org), a woman’s art collective and gallery. Artist and curator, Panida Suwann, greeted me at the door with a show she had curated in the foyer studio space, Fem Divinatio, “an all women group exhibition embodies a woman’s concept of divinity through superhuman imagery and witchcraft-esque symbolism.” A painter in her own right, Panida’s work was not included in her exhibition for display, however she directed me to a floral abstraction in a studio in the back, a glimpse of what’s to come for an upcoming exhibition. 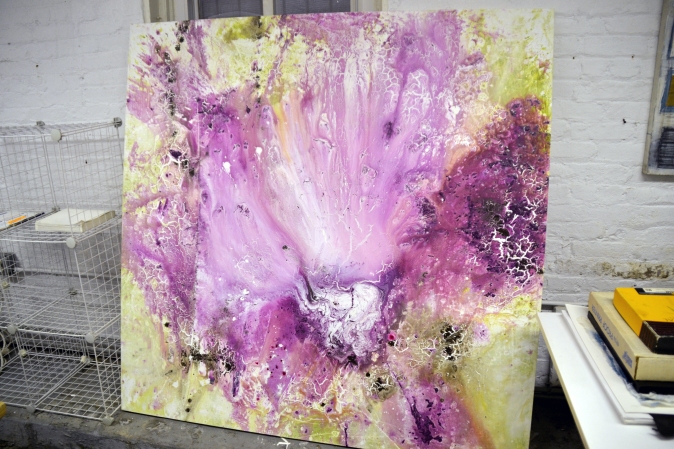 Detours aside, the last stop, “Freakshow”, was the perfect dose of candor, macabre, and freak to the smoothie of work that made up day. With more artists featured than I have space to do justice, Raven gallery and boutique features fine art, as well as illustrations, jewelry, custom furniture, clothing, dolls, and everything one might suspect to find in the Adams family mansion. The owner and curator, Andrea Mckenna, her work “captures the ephemeral spirits of her imagination that are both tranquil and aggressive” (andreamckenna.com). With such a diverse show, it was hard to pick one piece that stood out, but it helped reboot my brain to the beginning of my tour. Doll parts by Ellen Glynn, is a small sculpture featuring a deconstructed doll broken up and placed into dollhouse furniture drawers. Half morbid anatomy, half Dali, the practice of dismembering saints in order to create holy relics was not lost on me while looking at the piece. Although I was further along the road, the work could have easily fit within the Sanctus of Curious Matter as it did in the telltale heart of the Raven. Jersey city may be a diverse community of artists, but at the end of the day, it’s just a small community of people committed to making great work. 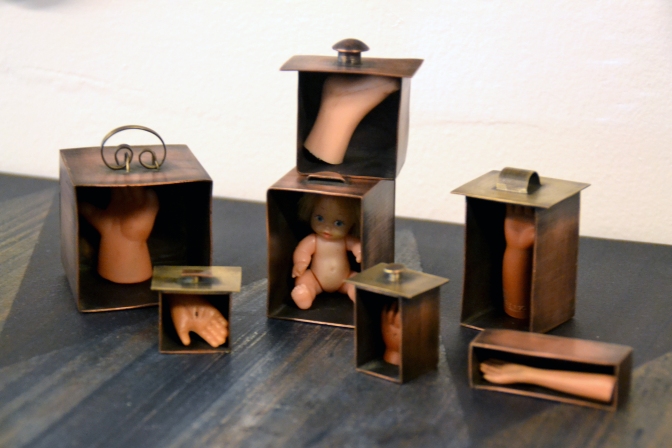 Artist, big things to come ;) Painter, Installation artist, Performance artist. I am available for commissions and shows and all work is for sale, feel free to contact me! View all posts by danielmorowitz